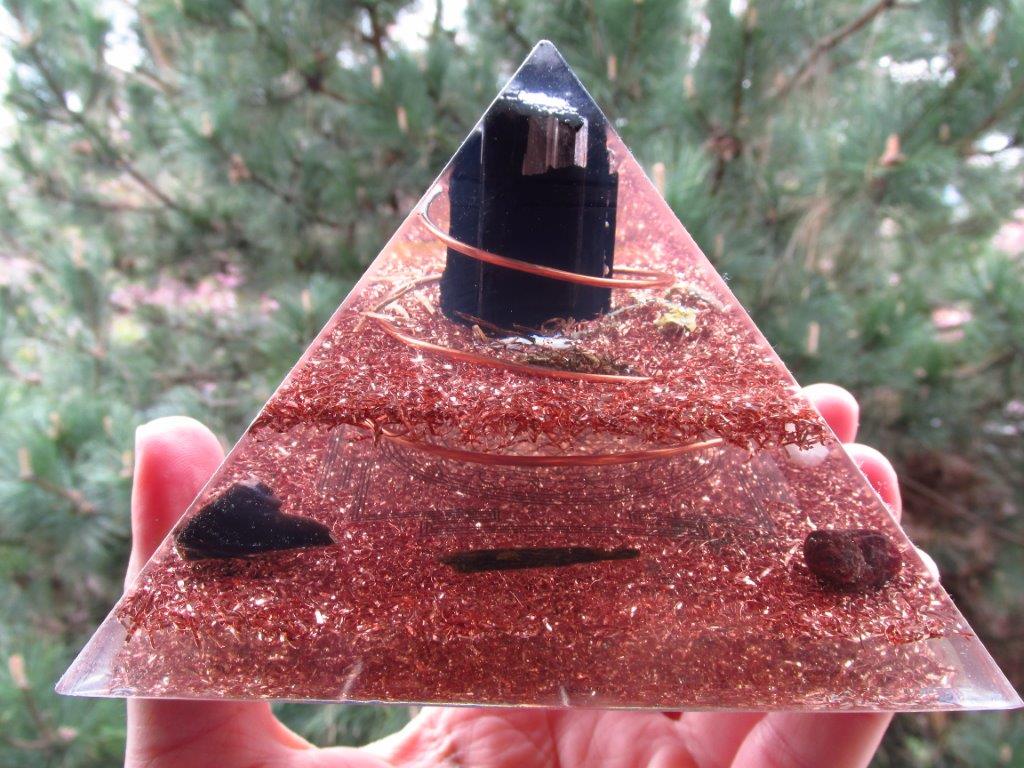 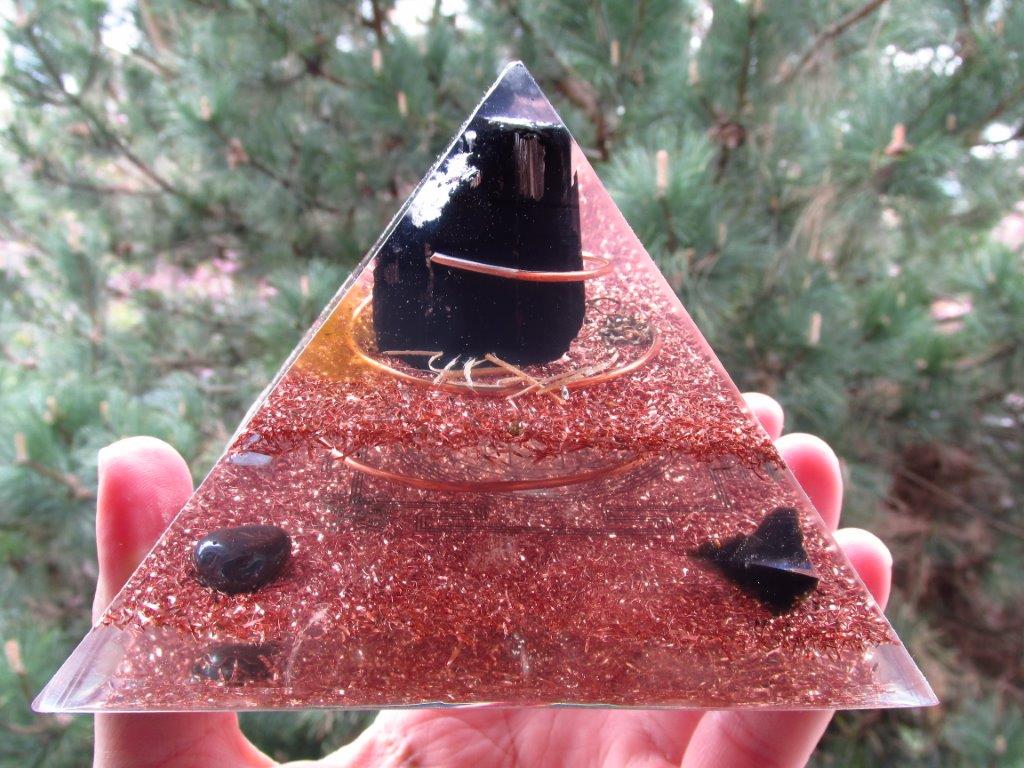 The Immunity Orgone Pyramid was a co-creation with my friend Julia King, who is an amazing Psychic and Channeller. I shared with her an idea to put herbs into an orgone pyramid to see if the vibrations of the herbs would be magnified by the orgone matrix. She was able to channel some interesting info before and after I created the prototypes. She strongly suggested I use Black Tourmaline as the center point crystal. That worked out really well for the theme this pyramid. When I shared it with a high level Buddhist friend he had mentioned that they use Black Tourmaline to absorb/repel negative energies that malevolent entities use to cause sickness in a person.

A quarter way down from the top is where i've placed the herbs, each on its own side. They are White Sage, Siberian Ginseng, Holy Basil and Goldenseal. Originally I had a few more herbs butJulia had channeled some info from the Devic Kingdom that there was too much overlap." ..4 directions to balance.." It was interesting to find out after the fact the herbs I was drawn to use represented the different ancient healing cultures.

Under that is 4 crystals that work in harmony with Black Tourmaline - Amethyst, Obsidian, Hematite, Garnet. This was suggested by Julia as a way to really magnify the power of the Tourmaline.

There is also a Sri Yantra Sacred Geometry Image in the center of the pyramid..

The Sri Yantra is considered the most powerful healing Yantra.

For a detailed description of the crystals please check the FAQ page
At the base of every pyramid I have left an open channel in the copper so that you can put the pyramid on an LED light stand. This really transforms the pyramid into an even more beautiful art piece.

The friends I shared the final product with all felt it was one of the most powerful pyramids I'd ever made.

There was alot of interesting information that came to Julia from the Elemental and Devic Kingdoms duriing her Channelling session with the Pyramid. I'd like to share a few quotes from the notes I took. "..as long as humans hold this with intention and focus then their Oversouls will know what to do..". So when you interact with this Pyramid simply Intend that it will boost and heal your immune system. She said that people will get images and suggestions, ideas of what to do/get to help them heal. So use the Pyramid interactively.

For the herbs she felt the Oversoul of each herb coming into her field. She was told that humanity was to relearn how to absorb the vibration of herbs just from holding them. . "...downloading the qualities of each vibration into the electric system of the body" ..."a new method of absorbing energies". Also we were to relearn the lost art of Healing Prayer, " ...people have lost the sacred power of Prayer." "...we are here now to be of service to keep the human body from deteriorating from earth changes."

What Customers have said:

"Hi Peter!  Thanks for the suggestions! I ended up putting the pyramid under my bed by my feet because my tendon in my ankle got injured from running. It was already healing but after i did that it seems my ankle doesn't hurt anymore! Also on the day after I obtained the pyramid, I was meditating in the evening and needed to study for my exam but I was tired. So it was like almost falling asleep kind of meditation. But all of a sudden i noticed it was brighter than it should be, and immediately i felt energy surges from my fingers where I was holding the pyramid which surged through my entire body! As well my chest area where my pendant was felt heavier / sore!  As well, I saw with my eyes closed what appeared to be a vortex of dark energy draining presumably into the pyramid!  After, I was totally awake and renewed and I think i did pretty well on the exam (for which the midterm i failed...). So I guess so far is a good experience with the Immunity Pyramid!!!
Also It seems my household has quieted down, as in usually people are shouting all over the place but I'm pretty sure this hasn't happened since the pyramid settled into my home.
So thank you

My women's group met today and I asked the four women to hold the Galactic Butterfly Pyramid and see what came to them before I read the meaning you provide on your website.

Here are the comments:

Felt high vibration energy, her body jerked once while holding it.

Immediately relaxed, amazed at how quickly she felt the vibration; an image of her third eye appeared.

Prosperity and abundance for all.

I received the “Immunity” pyramid a few weeks ago. Wow, what an awesome, powerful looking creation…beauty in black. I did what you suggested and connected with its energy the first night. I then put the base of it against the headboard with the point facing the top of the pillow/my head. I could feel the energy working on me, calming the nerves affected by shingles. As I prayed, I felt negativity leave me as my body always jerks when that happens. With it working as I sleep, I have been improving every day more quickly than I had been in the past. I also put it on my chest/thymus area sometimes too, when I am meditating lying down.

I am most grateful for all you do. It is so helpful to those in need…including me.

Thank you and God Bless!