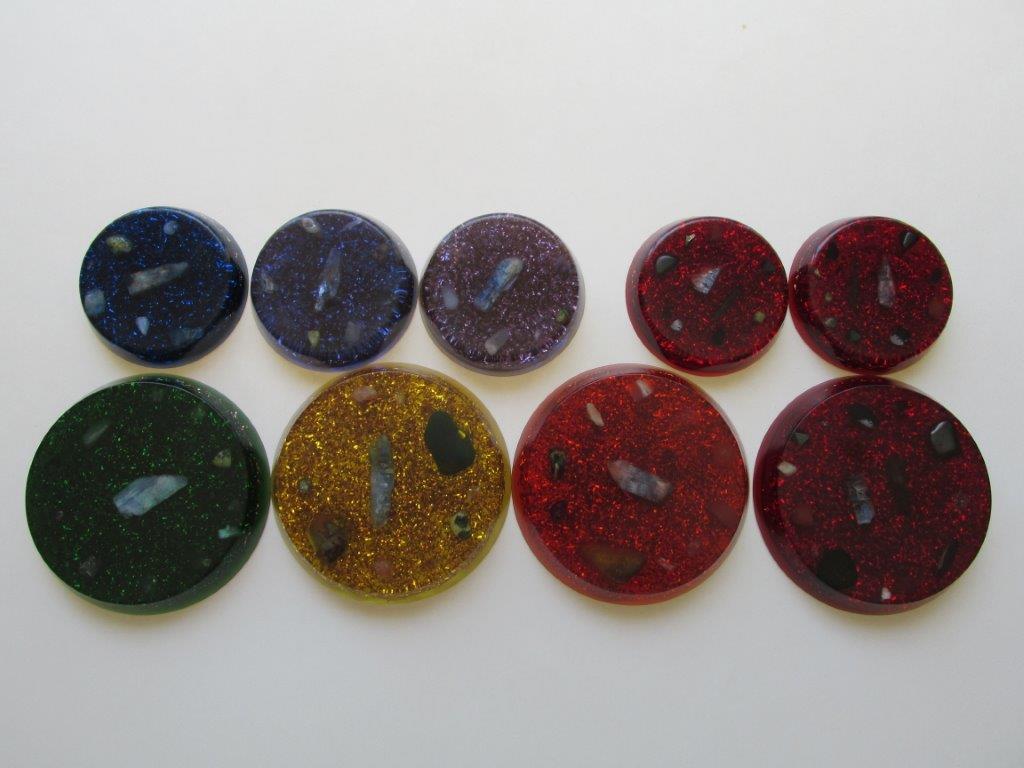 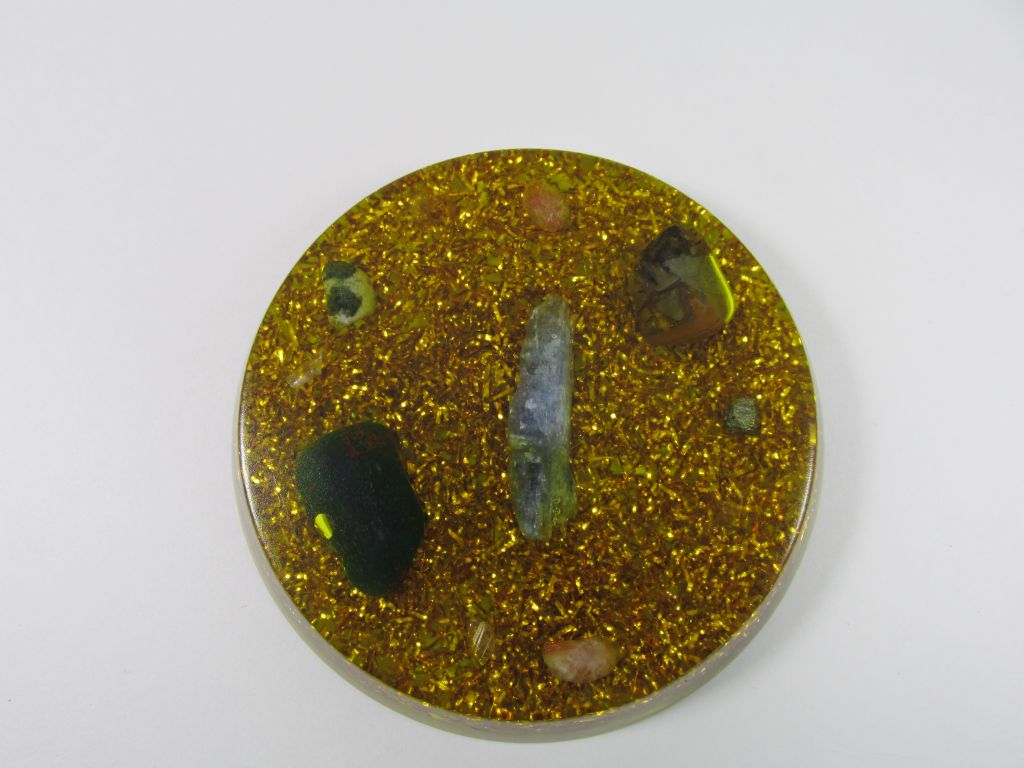 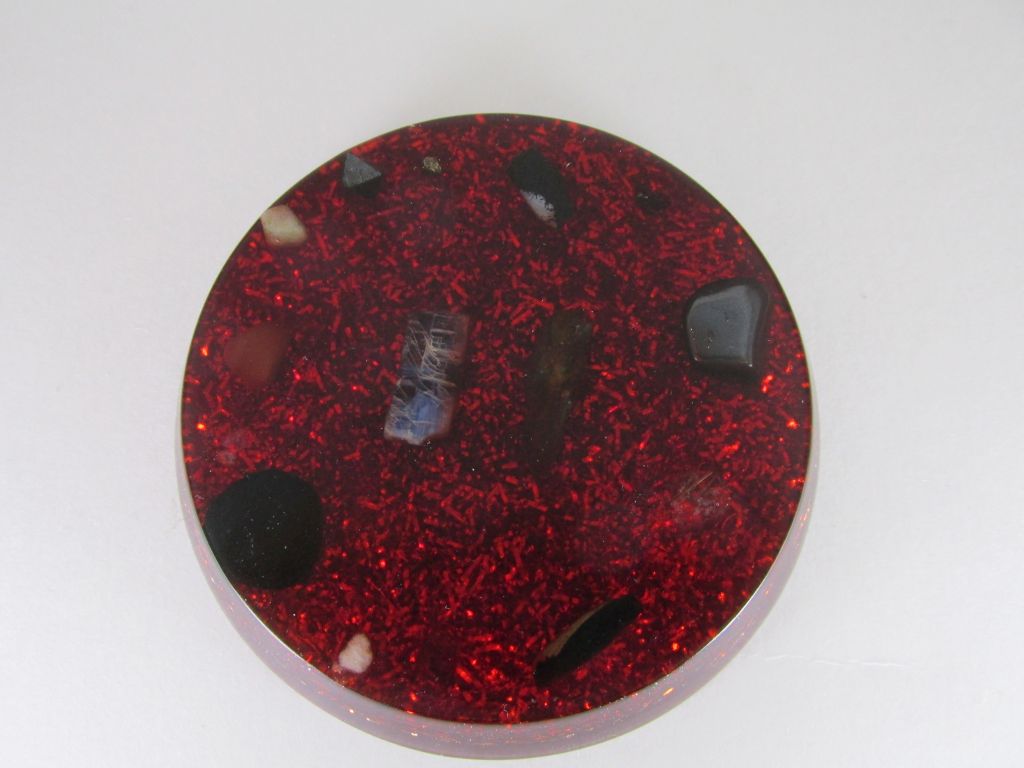 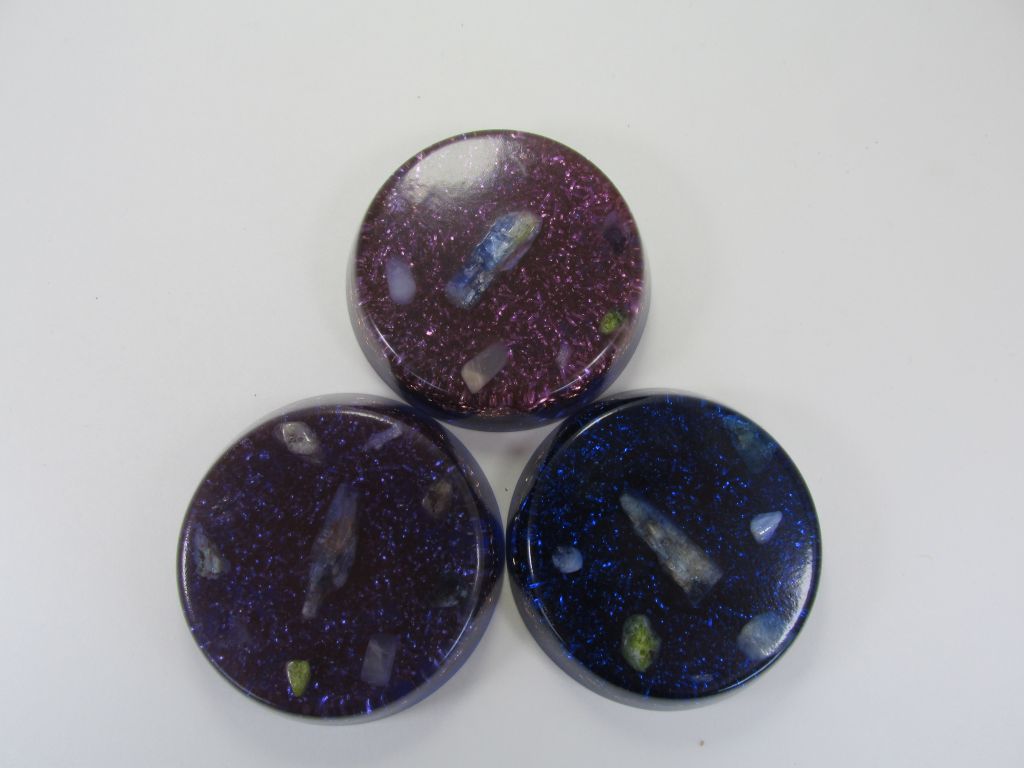 Orgone Chakra Discs are powerful tools to clean, rebalance, align and power up your chakras and energetic body. Simply place them on your chakras and they will work automatically. The discs are color coded to each chakra with the associated crystals for each energy center.

The larger sized discs are 8cm in diameter and smaller are little under 6 cm.

Whenever I make new products, I share them with my friends to verify firstly that they work, and secondly to find out exactly what it is doing. When I shared the Chakra discs, immediately my friends all commented on how powerfully the discs were working. The following info is a summary from the from notes I took.

It seems the first things these discs do is clean up your chakras, from psychic, lower astral energies and karmic debris. This makes the chakra sluggish, and the energy doesn't move well. So if your someone who hasn't done energy work before, or has alot of debris, these discs will kickstart the chakras and break this up. So the chakras will go from a clogged or blocked atrophied state to a more flowing expansive state. It will do this gradually and smoothly by dissolving the debris, and the orgone effect will transform it. The Chakra center will start spinning better and better. If you a healing practitioner it will help clear up any debris from your spiritual work.

If you are a person who has already done training, and your chakras are clear and moving properly, the discs will "amp this up big time", spinning them so much faster, enhancing their attributes, expand and stabilize them so they will hold more energy. Many of my friends shared with me that they felt these discs were so powerful that people new to energy work should use them only for a short time to begin with. Some have suggested they should perhaps only be used by energy practitioners, or people who have done energy body training. One of my friends suggested the discs be used only a few at time. When I mentioned starting at the root, naval and solar plexus, he said that was fine, but he would start from the crown downwards, as in his system of practice " the upper guides the lower". i would suggest obtaining a piece of Elestial Quartz and hold it in one hand, or place it on the solar plexus disc. I've read that it is a regulator of energy, and will let you absorb only what you are able to safely hold. I recently obtained some large Elestial points, so I'll be making Elestial pyramids soon, which also can be used in conjunction with the discs. Please treat these orgone creations with respect as they are very powerul energy tools.

I've also included two smaller red grounding discs to be placed in the socks over the soles of the feet. These will interact with the major chakra on the bottom of each foot, known as the Bubbling Springs Point. The idea for this came from Saurang McEwen, a Reiki Teacher who has a healing center in Ontario. She has been testing the discs with her students and clients and found them to be incredibly grounding.

What customers have said

" I have found the Chakra Discs to be incredibly effective during treatments. Both myself and clients have experienced immediate balancing of the chakras, as well as clearing of blocked energy held in the chakra centers. This alignment of energy allows one to move through physical, spiritual and emotional experiences in a more balanced and protected way." Candice - Utopia - North Vancouver

"Just wanted to let you know that duriing the Orgone chakra discs unveiling yesterday the red ones worked their grounding magic. All the students felt the non-stop tingling under their feet plus heat and heaviness. It was amazing to witness the smiles on their faces that they were experiencing sensations so poweful that they couldn't stop talking about even after the workshop was over. " - Saurang McEwen

" In regards to the discs I am very pleased with them! I noticed an extremely powerful warmth when meditating with the heart disk on my root chakra! It opened my kundalini instantly." - Scott, Vancouver

Crystals used in the Discs

An interesting synchronicity happened just as I decided to make these discs. One of my crystal suppliers had something new - serpentine, and asked if I needed any. So I looked in my crystal books and found that the main property of serpentine is to prepare each chakra center for a safe and balanced kundalini experience. It was such a perfect crystal for the chakra discs that I include it in each one.

After I made the first set of discs I remembered an interesting concept from the author of a book on the ancient Mayan civilization. He had written about the Biblical passage that 144,000 people, the elect, will ascend to God. Now the author talked about our chakras each having petals, like on a flower. The root has 4, the naval has 6, solar plexus 10, heart 12, throat 16, 3rd eye 96. Add these up and you have 144. The crown has 1000, so multiplying the two brings you to 144,000. So what if in order to ascend to God you needed to fully open all of the petals of your chakras? When I first read this many years ago I thought to myself, "I should make some orgone to help with this" So I'm very happy that it's finally materialized.

If you would like to use them while sitting in meditation, or standing, consider having made a shirt with pockets for each disc. I''ve envisioned a vest type shirt, buttoned on the sides, with multiple color bands associated with each chakra.